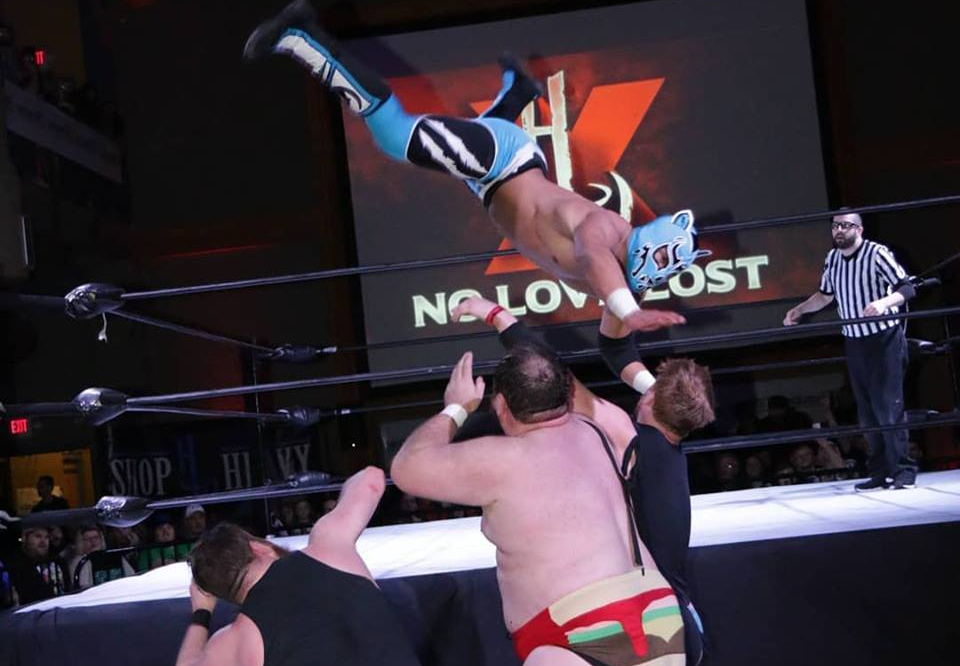 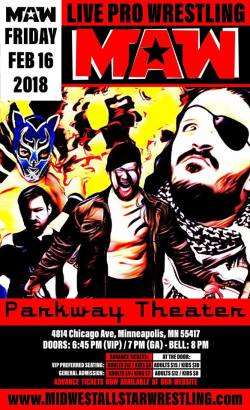 Kyle Pro vs. Rylie Jackson ends in a Time Limit Draw
Kyle Pro requested that he came here to win and that he and the fans want 5 more minutes but Jackson teased continuing then refused and walked out.

A video is shown of Garrisaon Creed arriving at the building and mixing it up with Duke Cornell in the lobby of the historic Parkway Theater. They have to be separated by officials. Following this video an opening package plays on the Theater screen which gives the show a big atmosphere. Great venue.

+ Tomahawk Kid def. Officer Robb Justice via Pinfall with a Spinning Back Stabber

Shoutouts from our MC for the evening Commissioner Brian Sager to podcasts in attendance: Heel Turn Radio, Wrestlecast Radio, and the Best Pro Wrestling Podcast as well as Parkway coordinator Earl Luckes.

Promos from the Maulers including a hilarious 20′ tall Stonehenge En Espanol
+ Maulers (Stonehenge + Damien Graves) def. El Tigre + Angel Dorado via Pinfall after a Chokebomb Combo
A standout of the match were the fantastic high flying moves of Angel Dorado and the tremendous lighting and shadows cast on the theater walls. Also, a standing 450 Senton from Dorado.

INTERMISSION: Brian Sager welcomes Nigel Davenport, The King of All Wrestling who thanks us for being here tonight and lets us know if we would like to see more wrestling at the Parkway to let the new management know!

Before we get started again Petey Brown + Ty Cooper call out JDX and Rylie Jackson who beat them down after their match. Brandon Gore and Kyle Pro show up behind the two heels and throw them in the ring when they try to escape. Brown + Cooper challenge JDX + Jackson to a match upon their return to Minneapolis.

After this two great promos are show from Wake + Literacy on the big screen hyping their match. Great use of the screen and pre-taped promos to hype the match. Some of these were released ahead of time and some were new.

+ “Starbreaker” Aiden Wake def. Leonard Literacy via Pinfall after interference from Wild Pete. Leonard and Pete brawl after the match landing potatoes on one another furthering their feud.

+ “The Dark Prophet” Orin Veidt def. Air Wolf after a the lights went out and then a distraction from the Maulers who reveal themselves to be disciples of the Dark Prophet. Great matchup with Veidt hitting his Witch Hunter (Gotch Style Piledriver Destroyer).

+ “The Soldier of Fortune” Garriasion Creed def. “Copperhead” Duke Cornell via Pinfall despite Duke having his foot on the bottom rope. The fans were not unhappy to say the least. 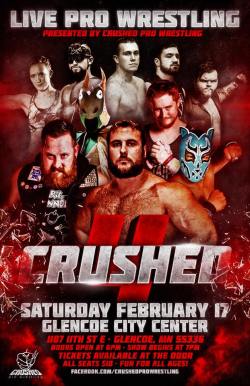 + Airwolf, Cris Cro and Angel Dorado defeated JDX, Brandon Gore and AJ Bond (Sterling Bond) by pinfall after a Howl at the Moon by Airwolf onto JDX

+ Orin Veidt came out and spoke about why he and Jacob Savage would be competing in the main event later in the evening. He spoke about their history of coming up together in the business, adding that he has taken advantage of every opportunity he’s been given while Savage has all the potential in the world but wastes it. Savage then came out through the crowd and the two brawled until they were broken apart by referees.

+ Josh Price (w/ Nikki Heyman) defeated Leonard Literacy (w/ Dewey Decimal) by pinfall after an F5 by Price onto Literacy. Price continued the beatdown after the match at the demand of Heyman, who instructed him to attack Decimal. Price grabbed Decimal by the hair and proceeded to deliver an F5 onto him as well, then forced the referee to count a non-binding three count on him as well.

+ Arik Cannon defeated Rob James by pinfall with a kick to the side of the head to a kneeling James.

+ Danny Duggan defeated King Leonidas and Super Thunderfrog by pinfall, thus qualifying for the upcoming Crushed Championship match at a later date. Duggan won after catching Leonidas off guard with a surprise pin. This match had some interesting notes, including Leonidas nearly lifting Thunderfrog’s hammer off the ground prior to the match. Leonidas also “blocked” the hammer from the top rope, which still affected Duggan and the referee, by kneeling and using his shield to negate the effects of the hammer’s shockwave.

+ Orin Veidt defeated Jacob Savage in a two-out-of-three falls match. The match started with Veidt scoring a quick pinfall on Savage after hitting him with a steel chair. Savage won the second fall by rolling through an electric chair position and catching Veidt with a surprise pinfall. The third and final fall saw some tremendous back-and-forth spots, including an absolutely incredible balcony dive from Savage. Veidt had beaten Savage through the crowd and into the merchandise area. Other wrestlers and bystanders pulled the two men apart to try and regain some sort of order in the contest, but this allowed Savage to get free from Veidt and onto the balcony above. He threw himself over the railing and onto a Veidt and a group of other wrestlers in a death-defying and breathtaking fashion. The two eventually battled back to the ring where Veidt would again attack with another chair shot to the head before hitting his patented Witch Hunter onto Savage to earn the victory.

Veidt celebrated his victory momentarily until he was confronted by Crushed promoter Alex Benson who called out Veidt for cheating and announced that Veidt and Savage would meet again in a rematch at Crushed 5 in Litchfield (date TBD). Savage got back to his feet and hit Veidt with a spear, then spinebustered him through a seated chair to end the night. 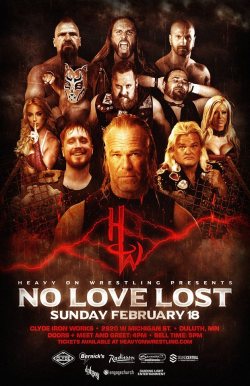 + King Leonidas defeated Lore and Chainsaw King by pinfall in a triple threat match. This was originally scheduled to be a tag team match that included Duke Cornell but Cornell was unable to make it to the venue due to travel issues stemming from the weather in the area. This match saw three very large combatants who weren’t limited by their size. Chainsaw King surprised the fans with a great dive through the ropes to the outside of the ring. Chainsaw King also powerbombed Lore – who is no small man – with ease, and there was a great superplex-into-powerbomb combination move with all three men involved. The end came when Leonidas delivered a stunner onto Lore for the pinfall.

+ Ken Anderson defeated Mitch Paradise by pinfall with a Mic Check into the middle turnbuckle. With this victory, Anderson became the No. 1 contender for the HoW Undisputed Championship, which he can cash in at any time.

+ Leva Bates defeated Kara Noia by pinfall with a killswitch to become the inaugural HoW Women’s Champion. This match was originally intended to be a four-corner match that included Bates, Angelina Love, Madison Rayne and Laurel Van Ness. Weather kept the other three women from making it to Duluth so HoW had to make a last-minute change to the card. This allowed Kara Noia, student from The Academy, to step up and make her in-ring debut in Minnesota at one of the biggest events of the year. Noia stepped up in a big way, despite battling the flu, and gave Bates all she could handle, but fell short in the end. These two women were given very little notice on the match change but still delivered a great match.

+ Billy Gunn defeated Shawn Daivari by pinfall with a Fame-Asser. Daivari cut off Gunn’s signature pre-match promo by attacking him from behind, but “Mr. Ass” took the time to pick up where he left off after the match and finish the promo.

+ Air Wolf defeated Darin Corbin, Arik Cannon and Kody Rice by pinfall with a Howl at the Moon onto Rice to become the HoW Undisputed Champion. This was a four-way, non-elimination match, which meant that Corbin could lose his title even if he was not pinned or submitted. The contest included each of the top four wrestlers from the MNDIY Wrestling Top 50 for 2017 and this match really proved why they were all very deserving of their high ranking.

+ Ken Anderson defeated Air Wolf to become the HoW Undisputed Champion by pinfall.

Air Wolf’s in-ring celebration was interrupted by his trainers from The Academy, Ken Anderson and Shawn Daivari. Daivari used a video camera to record the moment as Anderson congratulated The Academy’s first graduate for winning his first top championship. Anderson, who had become the No. 1 contender earlier in the night, then put Air Wolf on notice that he was coming for him — right now! Anderson smacked Air Wolf in the head with the title, then yelled for a referee, officially requesting his title shot on the spot. A referee ran out and counted but Air Wolf kicked out at two. Anderson picked Air Wolf up off the ground, then hit him with a Mic Check, which finally earned him the pinfall to become the new Heavy on Wrestling Undisputed Champion.