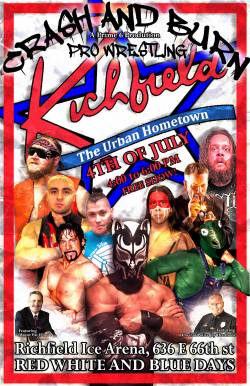 Lots of good double-team work by Kid and Creed early as the champs showed off their budding teamwork. A nice assisted over the top rope crossbody from Tomahawk onto the Black Plague knocked the big men down. Lore delivered a massive toss-up spinebuster onto Kal Creed. The Plague repeatedly double-teamed the legal man behind he referee’s back. Huge forehand chops by both members of the Plague onto Creed who was really taking a beating. Creed finally generated some offense for a comeback and went to dive across the ring to tag Tomahawk but got rejected out of the air with a pounce-like attack by Lore. Kal finally broke loose when Stonehenge missed a clothesline and hit his own teammate. Tomahawk got the hot take and went wild, pummeling both members of the Plague until he ran into Lore who delivered a Black Hole Slam out of nowhere! Creed and Lore tumbled to the outside and Stonehenge hinted a tribute to Vader with a Vader Bomb but then went to the top and went for a Vadersault but Tomahawk moved! Stonehenge stumbled to his feet and Kid rolled him from behind to get the pin!

Avalon cut and intense promo before the match about how he’s going to turn Cannon inside out, then come back to Battleground and win every championship in the company in ONE NIGHT!

Avalon attacked Cannon from behind during his in-ring introduction. Great back-and-forth action from both men, including a nice cradle flatliner from Avalon. Avalon went to the top rope and missed an elbow drop which gave Cannon a chance to recover a bit. He went to the top rope and leaped over Avalon. Avalon rushed in and got knocked back, then Cannon delivered Total Anarchy for the pin.

This gauntlet-style match featured two competitors in the ring at a time with the winner moving on to face a new opponent. The final man standing would become the No. 1 contender for the Pro Wrestling Battleground Breakout championship.

Kyle Pro defeated James Tapia
A great pace set early in this gauntlet match as both Pro and Tapia showed off their ever-improving technical ability as well as their speed. Pro eventually gave Tapia a Kyle Driver to get the pinfall.

Ricky Noren defeated Kyle Pro
Longtime rivals battled second in the match as Noren attacked from behind. Noren earned a near fall with a side Russian leg sweep and continued to control Pro. Pro went for another Kyle Driver by Noren slipped out and rolled Pro up with a schoolboy with the tights held to get the pin!

Ricky Noren defeated Angel Dorado
Dorado knocked Noren down and connected with a rolling cannonball off of the top rope right away, nearly got the pin right there but Noren got his feet on the rope! A double foot stomp takedown from Dorado got another near fall. Dorado delivered another double foot stomp takedown followed up by a reverse 450 backsplash but Noren again kicked out! Dorado went to the top and went for a 450 splash but Noren rolled out of the way so Dorado rolled through it! He turned around and Noren caught him with his atrocity exhibition submission hold for the win.

Giant Griffin defeated Ricky Noren
Griffin knocked Noren down with a big forearm to start things then missed a top rope elbow drop. Noren went for the same atrocity exhibition submission he got Dorado with but Griffin overpowered him then delivered a choke slam to pin Noren and win the whole match!

Jackson and Air Wolf faced off for the second month in a row after Jackson was disqualified when his fellow member of the The Firm, ESQ, interfered in the previous match. Jackson had mentioned throughout the week that he would not need ESQ to defeat Air Wolf and thus was asking him to stay away from ringside. Jackson walked out by himself initially, but then turned around and walked back. He then walked out not with ESQ but rather with another member of The Firm, Ricky Noren. Air Wolf came out and was not intimidated, immediately chasing Jackson out of the ring right at the opening bell.

The match eventually began with a tremendous pace from both competitors early as two of the top young talents in the state really showed off their athleticism. Jackson finally slowed things down when he caught Air Wolf between the ropes and curb stomped him on the apron. An impressive springboard knee to the face by Jackson connected hard but he taunted the fans rather than going for an immediate pin. Air Wolf delivered a flying neckbreaker and nearly got the pin. Jackson regained control and got in referee Clark Feldman’s face, who disqualified him last month, but Feldman pushed him down! That gave Air Wolf time to recover and he unleashed some more impressive, fast-paced maneuvers including a standing shooting star press that nearly earned him the pin. Air Wolf went for a springboard off the middle rope but Jackson met him on the middle turnbuckle and gave him a huge Russian leg sweep! Jackson nearly won it right there but Air Wolf narrowly kicked out. Air Wolf missed with a series of kicks then caught Jackson with a power bomb followed by a huge kick to the face. Later, Jackson landed a huge suplex type move it couldn’t finish the champion. They battled to the ring apron where Air Wolf knocked Jackson off then flew through the ropes to the outside, knocking Jackson down! Back in the ring, Noren distracted the referee as Jackson hit Air Wolf with a foreign object in the head, then gave him a v-trigger knee to get the pin and become the new Pro Wrestling Battleground Breakout champion! Jackson and Noren taunted Air Wolf by standing above him with the title and ripping up one of his 8×10 photos.

Jordy Lee, like Joey Avalon before him earlier in the night, cut a pre-match promo where he talked down to the crowd and said he’s going to break Thunderfrog’s hammer.

Jordy Lee demanded that the hammer be set outside the ring, so Thunderfrog handed it to referee Alex Benson who got stuck in the corner under the hammer. Frog immediately went to work on Jordy, giving him a stunner, a ten punch count in the corner, a face buster, an airplane spin and a rolling splash into the corner. The crowd was loving it but the referee was still stuck in the corner, unable to count any pins. Jordy finally got some control when he caught Frog as he went to the middle turnbuckle for a Vader splash. They battled to the outside and into the crowd as Jordy tried to escape the building but Frog chased him, beating him from pillar to post throughout Wilebski’s Blues Saloon. Referee Alex Benson was still stuck and couldn’t do anything to stop the battle on the outside, or even initiate a ten-count. Frog hit Lee with a fan’s metal crutch, then bodyslammed him on the concrete floor and applied a sharpshooter. Jordy grabbed the crutch and hit Frog in the leg with it. They finally fought back to the ring where Frog continued his attack. Frog gave Lee a power slam which would’ve won the match but the ref was still down. Frog then gave Lee a frog splash but again, the ref was down. Thunderfrog finally noticed Benson being down the corner and went to help but Lee attacked from behind with a low blow, then threw him face first into the hammer which was still on Benson. Lee delivered a belly to belly suplex and the stroke face-slam but Benson was still down. Lee went to lift the hammer off of Benson but couldn’t. Frog came up from behind and picked both Lee and the hammer up, slammed him down with the hammer across his chest and got the pin as Benson was finally let free.

Making his first title defense since winning the championship back from Super Thunderfrog at the previous show, Venom was seemingly in full control of this match early, using his size and strength to his advantage early. Story had the speed advantage, though, and knocked Venom to the outside, then leaped over the top rope to the outside onto the champion! Back in the ring, Story went for a cross body block but Venom caught him and slammed him down. Venom continued to use his power to throw Story around but he couldn’t quite finish him. Story went for a springboard maneuver on Venom but got tossed onto the turnbuckle. Venom then gave Story a stunner with Story’s feet on the top rope. A near fall with that but Story got his hand on the bottom rope. Venom went to the middle rope and tried to give Story a double axehandle but got caught and taken down with a sidewalk slam. Story went to the top rope but Venom got there and pulled him off. A near fall with a big splash after a backbreaker by Venom. Story went for a springboard forearm but Venom pulled referee Alex Benson in the way, who took the full effects of the forearm from Story. Story got back to his feet and took a huge discus punch from Venom but no referee was there to count the pin.

Super Thunderfrog came out and knocked Venom down by spiking his hammer onto the mat, then gave Venom a frog splash! Story got to his feet, saw Venom was down and gave him a swanton bomb to earn the pin and become the new Pro Wrestling Battleground champion!